Opening to a new Love Relationship

There comes a time in your life when something happens, such as a great Loss, that creates a shock wave in your being; yet it is a gift from your soul to awaken you. Like five thousand volts of electricity, of sizzling spirit zipping through your being, you are left fazed and momentarily dazed. And then you see with crystal clarity… what you have been hanging on to, that keeps you encapsulated in the tomb of your own confinement. 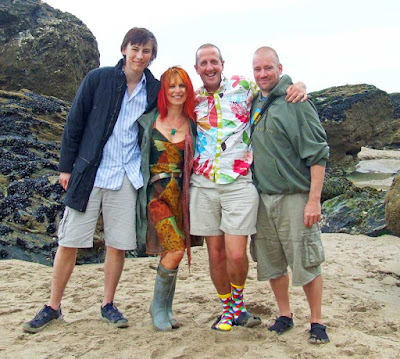 And so dear friend, I had a shock that was precipitated in the wake of the high energy wave of our most recent Living In Light course. As is customary and a wonderful finale to our course we found ourselves, that is John, Johannes and I (and my son Daniel) walking in bliss, with the wind in our faces and the taste of salt water on our lips, along the golden sands kissed by the sparkling turquoise waters to the crescent moon shape cove at Chapel Porth. 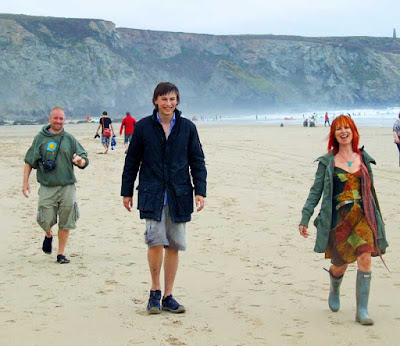 After walking through thigh deep water (the surging tide was coming in fast) we reached our lovely sheltered, honeyed haven and flopped ourselves down on soft glorious silky sand near very shiny black rocks polished smooth by the tides, to savour the stunning views of the rugged blue Cornish coast. John was talking away rather animatedly to Johannes (I had my back to them, and was silent, mesmerised by the effect of light dancing on water), when I was stunned out of my revelry as I heard Johannes’s urgent voice calling me: “Leela, Leela, John has fallen over!'

I abruptly turned round and felt the cold blast of loss hit my Heart.

And then the quickening: the shock of seeing my beloved lying helpless and unconscious on the sand accompanied by a punch-in-the-gut feeling, left me breathless and in a spin…… I saw my beloved had lost that light in his eyes. Sickeningly, I thought he had had a stroke or even that my beloved was dead...

And the cathartic pain of having my Love ripped from my heart cut through me, like razor, to lead me back to a memory of a past life.

It was when I had lost my Love before on a battlefield under leaden skies and fields stained with blood. He was lying there in what seemed like John’s forlorn form. I was trying to stem the blood from his bleeding heart, but to no avail… and I knew I was losing him then to the pale grey of dawn, as I felt I was now on the sands by the sea.

I lamented deeply. As he lay there with lifeless eyes, his lips pale and shrunken, there was a horrible wrenching to my heart, as I felt love and life floating out of me on the Atlantic’s misty mizzle.

So there I was: going through this eternal echo moment again, with my beloved. Out of the whirlpool of my churning emotions another misted memory came to mind: when I was only sixteen I was left numb by the shattering shock of the tragic death my first True Love as my parents simply said: 'He's dead'.

That left part of me frozen in a wrinkle of time and spinning down the path of self-starvation (anorexia), but that’s another story.

And so, as I gazed down to stare at my love as he lay there limp and lifeless, cradling his head in my arms, I am not proud to say: I felt, not just the overwhelming loss of my Love, but also the deep primal fear of total loss of support and the gaping hole of life bereft, and so very much on my own.

And all that left its frozen deathly grip on my heart and was ripping me apart, yet opening me for something ‘more’ in my being… I just didn’t know what.

Just as I felt this and poured my heart into John, I saw his eyes flicker, a smile breaking over his face as he came back from our w-holy and saving grace.

He opened his eyes and smiled and asked: 'Why are you staring at me?' !

So we looked at John and we all sighed with relief as he had light back in piercing blue eyes, though he still looked a bit grey. And we marvelled together in wonderment at how when he had fallen and hit his head on the rock he was sitting on he had had his fall broken by a soft carpet of sand that, synchronistically, a child had made earlier, in her play. He'd simply got too heady from the incredibly high Living In Light energies (highest ever!), not eaten enough and fainted. Within minutes he was fully recovered and we all saw how he'd served us all, and yet he'd been fully protected at the same time. 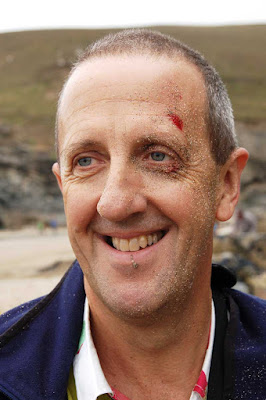 So, I was being given a message, as our soul’s angst often will do to open us up to something more.

It left me musing and meditating on my own relationship to my Self and my life. I realized that I too must die to an attachment to survival and support and love limited only to another, or it would be like a real death to me: one that snuffs out my light and whips at my soul.

And so on the following day beneath July’s hot sizzling sun I made a declaration of soul to be open to something more. I opened my arms and body, willingly to the listening Sky and cried out aloud: 'I surrender; I surrender to more, a new Love relationship with my world. I will grow into more of me and my Love.'
And as I relax and surrender and enjoy our embrace, I feel my Love always there, in every living particle of my loving universe. 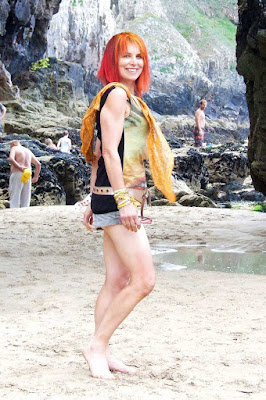 I feel it now, I grow and shine.

So, dear friend whenever you experience something in your life that feels like a great a loss or shock, see it with fresh eyes as means to free you from that which you maybe clinging onto in desperation and attachment. It's there to awaken you, to expand and open you to something more, not less.

You are growing too, my lovely, you are …

And I love you so very much,

I am amazed by you everyday, Leela. That you saw more of the truth of your soul, during such a potentially scary situation, just astounds me. I see the gift in it, and understand the message, thank you. And very glad John is ok.He played a major role, while unsconscious!

What a wonderful story Leela...you are an incredible writer...you paint such a vivid picture!!

You are so right. Those moments when we initially feel that ALL is lost can be the most empowering and can open us up to greater and greater levels of joy.

My brother died unexpectedly 4 yrs ago. As I said goodbye to his lifeless body, I momentarily felt a loss like none I'd ever felt before...he and I were very close and it felt in a sense like I had also died. I can relate to your story in that it felt like 'lifetimes of loss' hitting me all at once.

In the instant that I hit this deep despair, something amazing happened. I began to hear my brother's voice. His message was so light-hearted and filled with so much love and joy that I immediately joined him in his feeling of new-found freedom and joy.

The ability to converse with him has stayed with me and has also opened up the door to my receiving all sorts of wonderful energy from the realms of spirit!

I would never have dreamed that such a horrific occurrence could be the catalyst for such a new and wonderful perspective on life and an overall expansion of my own consciousness.

Since my brother's death, I live in a higher state of joy and I thank him every day for sharing this gift.

Leela, what a beautiful story amidst the potential tragedy. That is the expression of the soul at its purest even if faced with adversity. I marvel at its potential every day. Thank you for sharing it, and thank you for your loving and supportive emails during my time of soul recovery.

My love to both of you. Yes, we never know when death will occur and so I would like to take this opportunity to say how much i love you and am so gratefull for having you both in my life.
Your words of wisdom and your unconditional love has and is instrumental to me in this life.
Thank you for all that you are.
SunSong

Wow- Leela, what a story. I could feel the emotion ripple from my screen to my heart while reading and went "oh no, say this isn't true, don't let this fruitful relationship die in a thud on the beach". And as my eyes crept down the text to where John opens his again, my heart jumped for joy that you were granted to still be together.

This story and all kinds of little developments in my own life right now, are rattling my comfy couch to wake up to my own reality experience, and re-calibrate where I stand in my dependence upon loved ones, my job, (what's left of) my religion, my narrow mind-set from my childhood education...

Every day is a gift, live it to the full ♥

click here for info and FREE introductory taster session with me
www.loveandinsight.com

Your CONTRIBUTION is deeply appreciated - Thank You!